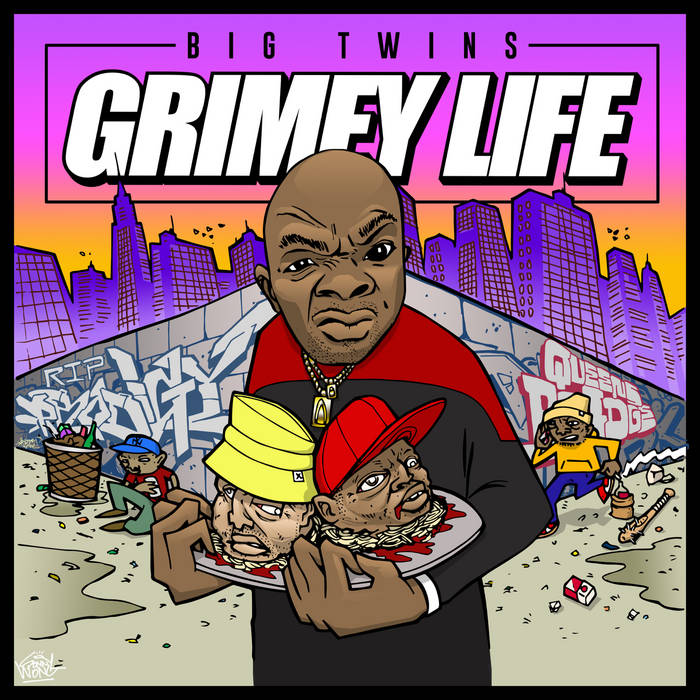 HIGH LEVELD salutee homie the album is nothin but firee. never disappointed whenever you drop a project.
much success to you brotha and stay stafe outhere. Favorite track: Loyalty over Love (feat. Prodigy) [prod. by DJ B. Original].

With more than two decades in the game, Queensbridge rap stalwart Big Twins continues to get better with time. It’s a sentiment he says about himself with a laugh, but he couldn’t be more on point. His latest opus, Grimey Life, is his most ambitious, yet focused piece of work to date as he unravels personal struggles, pain, triumphs, and much more on its 15 tracks.

Twins lets his mission statement ring loud and clear on opening track “Focus” when he packs so much emotion and rawness into these rhymes: “More focused than I ever been/ I went through wars, had to get it in/ Almost sprayed with the Mack-10/ But the shit jammed, I start laughin’/ Old fashioned, that’s why I’m still alive/ I don’t wanna see my brother on the other side/ Maybe one day, but not yet…”

Armed with his trademark raspy voice, Twins lets it all unravel with brutal honesty and, just as important, impeccable beat selection. His ear for production has been on another level for years, something he says the late Prodigy acknowledged before he passed. “He was talking to me about his next album and he wanted me to pick all the beats,” Twins remembers (P appears on the great “Loyalty Over Love,” which is Twins’ favorite track on the album).

Fittingly, longtime collaborator The Alchemist appears with the haunting production on “Phantom of the Opera” (“That’s my brother, we motivate each other,” Twins says), while L.A. beatsmith Knxwledge helped make “Memories” into the standout it became. Twins, who is joined by Havoc on the track, had the bones of “Memories” created but couldn’t find the right beat—until, of course, he met Knx and he heard the angelic, percussion heavy production you hear on the song.

Other guest features include the likes of Ty Nitty and Godfather Pt. 3 (his former Infamous Mobb partners), Ras Kass, LMNO, Planet Asia, Big Noyd, and others, while the other producers include Jaisu, DJ Skizz, DJ B. Original, Beatnick Dee, and Twiz The Beat Pro (who released TNT with Twins in 2016).

There’s a lot to love and unpack on Grimey Life, and like Twins alluded to earlier, it’s only the beginning. CD and vinyl will be available as well in limited quantities.

Bandcamp Daily  your guide to the world of Bandcamp

Guest hosted by Tamar Osbourn aka Collocutor and Toshio Matsuura.